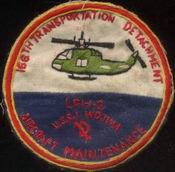 The 166th TC Detachment was activated at Fort Benning, Georgia by General Order 44, Third US Army effective 19 March 1965. It was designated as "Cargo Helicopter Field Maintenance" with an authorized strength of 1 officer, 1 warrant officer and 70 enlisted men.

They departed Fort Benning on 10 April 1965, traveled by ship and arrived in Vietnam 1 May 1965. They were assigned to 1st Log Command and stationed at Vung Tau.

The 166th had the distinction of bringing the first UH-1D model helicopters "slicks" to the Republic. An "in country" pocket patch was designed, though not well executed, denoting this. The patch said: 166th Transportation Detachment Aircraft Maintenance, LPH-2, USS Iwo Jima, D. The local artisans could not make a "Huey" and spelling was not their strong suit either, but the members wore the patch with pride.

As they were stationed at Vung Tau, enjoyment of the ocean at unit parties was almost a requirement; all new members were thrown into the surf to show that they now belonged. Even after moving to Bien Hoa, new members would still be dunked into a trailer filled with water - usually after the ice had melted!

The unit was moved to Bien Hoa to support "A" Company of the 82nd Airborne Division and the 173rd Airborne Brigade Separate. "D" Company Maintenance of the 173rd supplied some personnel to the unit, also. The commander of the 166th at this time was Captain Delmer McConell, an activated USAR officer. The Captain was very well liked by his men, as he saw that they received the best that was available at the time.

During the summer of 1966 the US Army started the "Zero Defects" program and the 166th did their share by working day and night to support the actions taking place. The ships were brought in after the combat assaults, repaired overnight and were flying by six o'clock in the morning. Status reports were delivered to the 145th AVN Bn HQ in downtown Bien Hoa by 0530 hours showing available aircraft for that days missions.

The 166th was also noted for being built in the middle of a Vietnamese cemetery, having their "Playboy Club" photographed for "Playboy Magazine", painting the first US Army camouflage "Hueys" and for having the oldest, continuous duty "B model Huey" in Vietnam. Number 21901, known as "Horsethief". Horsethief appeared in "Modern Military Aircraft HUEY" by Lou Drendel for its unique camouflage.

In November 1965 Second Lieutenant John Price of Company "B" 2nd Bn 503rd Infantry made arrangements for the unit to receive a "lifetime" subscription to "Playboy Magazine"; the Playmate of the Year came to visit in January of 1996 to present him with the acceptance of the subscription. Using one of "A" of the 82nd company "slicks", that the 166th had repainted and named the "Playboy Special", the group from "Playboy" traveled over a wide area. Check out the May 1996 issue of "Playboy Magazine" for details.

Captain McConnell rotated home in early 1966 and was replaced by Captain Paul Lovgren. Major Donald Pritchard and then Major Robert Lawson before the unit moved to Dak To in February 1967.

The unit left its concrete pads, wooden "hooches" and their access to the Bien Hoa Airbase with some trepidation; flying the ships north to Camp Hollaway in Pleiku, then freezing the first night there at 70 degrees. They then convoyed to Dak To, Dragon Mountain, a 4th Division area. On arrival tents were set up for living and work areas and everyone had to get used to working out of shop trailers, connex containers, and in mud.

The move also increased distances that the men had to travel for the basics; the mess hall was about two miles away and the closest shower point about a mile and the PX facilities were small. Gone was the comfort of Bien Hoa, Long Binh and Cho Lon. Local rain suits and ponchos became the uniform of the day.

This is as far as I can go as I left the unit in July 1967 by returning to Bien Hoa and the old 335th area. They still kept an orderly room and maintained the buildings. This gave them a staging area to send new people up north and to send us old timers home.