No doubt most of us share a reaction to this dreaded phrase. I know my skin crawls when I hear somebody say it. Over the years I finally made a personal pact with myself: Anytime, whenever and wherever I hear a person say "We (the USA) lost the war in Vietnam", I will confront them and enlighten them with the facts from first hand accounts, not newsprint.

I remember the first time I heard a great reply to this uninformed statement. It came from a friend of mine, "Pointclerk" a.k.a. Gary Vanschoiack (3/503). He said: " Lose the war?!...F#*K! we left, we picked up our football and went home!"

I don't recall being ordered to drop my weapon and place my hands over my head to be marched into a prison camp. But I doremember things like our mail service to the FSB's in hills of Pleiku, Dak To, Tuy Hoa and every other place, being as regular as present day service in my neighborhood. 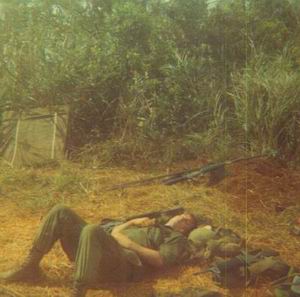 Recently, an email came my way from God knows where. It was information cleanly assembled and launched by a Fred Marshall. Fred, I don't know you and don't know where you are but you said it right and you said to spread the word.

I invite anyone to read and remember these facts.

"If you did not serve in Vietnam, or if you believe that the US news media has the good of the nation at heart, please read all of this:

For nearly 30 years I....like many Vietnam veterans....seldom spoke of Vietnam, except with other veterans, when training soldiers, and in public speeches.  These past five years I have joined the hundreds of thousands who believe it is high time the truth be told about the Vietnam War and the people who served there.  It's time the American people learn that the United States military did not lose the War, and that a surprisingly high number of people who claim to have served there, in fact, DID NOT.

As Americans support the men and women involved in the War on Terrorism, the mainstream media are once again working tirelessly to undermine their efforts and force a psychological loss or stalemate for the United States.  We cannot stand by and let the media do to today's warriors what they did to us 35 years ago.

Below I have assembled some facts most readers will find interesting.  It isn't a long read, but it will....I guarantee....teach you some things you did not know about the Vietnam War and those who served, fought, or died there.
Please share it with those with whom you communicate.

Vietnam Veterans represented 9.7% of their generation.

The first man to die in Vietnam was James Davis, in 1958.  He was with the 509th Radio Research Station.  Davis Station in Saigon was named for him.

Five men killed in Vietnam were only 16 years old.

97% of Vietnam Veterans were honorably discharged

91% of Vietnam Veterans say they are glad they served

74% say they would serve again, even knowing the outcome

Vietnam veterans have a lower unemployment rate than the same non-vet age groups.

Vietnam veterans' personal income exceeds that of our non-veteran age group by more than 18 percent.

85% of Vietnam Veterans made successful transitions to civilian life.

Interesting Census Stats and "Been There" Wannabes:

~ During that same Census count, the number of Americans falsely claiming to have served in-country was: 9,492,958.

The Department of Defense Vietnam War Service Index officially provided by The War Library originally reported with errors that 2,709,918 U.S. military personnel as having served in-country.  Corrections and confirmations to this erred index resulted in the addition of 358 U.S. military personnel confirmed to have served in Vietnam but not originally listed by the Department of Defense. (All names are currently on file and accessible 24/7/365).

Isolated atrocities committed by American Soldiers produced torrents of outrage from anti-war critics and the news media while Communist atrocities were so common that they received hardly any media mention at all.  The United States sought to minimize and prevent attacks on civilians while North Vietnam made attacks on civilians a centerpiece of its strategy.  Americans who deliberately killed civilians received prison sentences while Communists who did so received commendations.  From 1957 to 1973, the National Liberation Front assassinated 36,725 Vietnamese and abducted another 58,499.  The death squads focused on leaders at the village level and on anyone who improved the lives of the peasants such as medical personnel, social workers, and school teachers. - Nixon Presidential Papers


Myth: Common Belief is that most Vietnam veterans were drafted.

Myth:  The media have reported that suicides among Vietnam veterans range from 50,000 to 100,000 - 6 to 11 times the non-Vietnam veteran population.

Myth:  Common belief is that a disproportionate number of blacks were killed in the Vietnam War.

Fact:  86% of the men who died in Vietnam were Caucasians, 12.5% were black, and 1.2% was other races.  Sociologists Charles C. Moskos and John Sibley Butler, in their recently published book "All That We Can Be," said they analyzed the claim that blacks were used like cannon fodder during Vietnam "and can report definitely that this charge is untrue.  Black fatalities amounted to 12 percent of all Americans killed in Southeast Asia - a figure proportional to the number of blacks in the U.S. population at the time and slightly lower than the proportion of blacks in the Army at the close of the war."

Myth:  Common belief is that the war was fought largely by the poor and uneducated.

Fact:  Servicemen who went to Vietnam from well-to-do areas had a slightly elevated risk of dying because they were more likely to be pilots or infantry officers. Vietnam Veterans were the best educated forces our nation had ever sent into combat.  79% had a high school education or better.

Here are statistics from the Combat Area Casualty File (CACF) as of November 1993. The CACF is the basis for the Vietnam Veterans Memorial (The Wall): Average age of 58,148 killed in Vietnam was 23.11 years. (Although 58,169 names are in the Nov. 93 database, only 58,148 have both event date and birth date.  Event date is used instead of declared dead date for some of those who were listed as missing in action)

Myth:  The common belief is the average age of an infantryman fighting in Vietnam was 19.

Myth:  The Common belief is that the domino theory was proved false.

Fact:  The domino theory was accurate.  The ASEAN (Association of Southeast Asian Nations) countries, Philippines, Indonesia, Malaysia, Singapore and Thailand stayed free of Communism because of the U.S. commitment to Vietnam.  The Indonesians threw the Soviets out in 1966 because of America's commitment in Vietnam.  Without that commitment, Communism would have swept all the way to the Malacca Straits that is south of Singapore and of great strategic importance to the free world.  If you ask people who live in these countries that won the war in Vietnam, they have a different opinion from the American news media.  The Vietnam War was the turning point for Communism.

Myth:  The common belief is that the fighting in Vietnam was not as intense as in World War II.

Fact:  The average infantryman in the South Pacific during World War II saw about 40 days of combat in four years. The average infantryman in Vietnam saw about 240 days of combat in one year thanks to the mobility of the helicopter.  One out of every 10 Americans who served in Vietnam was a casualty.  58,148 were killed and 304,000 wounded out of 2.7 million who served.  Although the percent that died is similar to other wars, amputations or crippling wounds were 300 percent higher than in World War II ....75,000 Vietnam veterans are severely disabled.  MEDEVAC helicopters flew nearly 500,000 missions.  Over 900,000 patients were airlifted (nearly half were American).  The average time lapse between wounding to hospitalization was less than one hour.   As a result, less than one percent of all Americans wounded, who survived the first 24 hours, died.   The helicopter provided unprecedented mobility.  Without the helicopter it would have taken three times as many troops to secure the 800 mile border with Cambodia and Laos (the politicians thought the Geneva Conventions of 1954 and the Geneva Accords or 1962 would secure the border).

Fact:  No American had involvement in this incident near Trang Bang that burned Phan Thi Kim Phuc. The planes doing the bombing near the village were VNAF (Vietnam Air Force) and were being flown by Vietnamese pilots in support of South Vietnamese troops on the ground. The Vietnamese pilot who dropped the napalm in error is currently living in the United States.  Even the AP photographer, Nick Ut, who took the picture, was Vietnamese.  The incident in the photo took place on the second day of a three day battle between the North Vietnamese Army (NVA) who occupied the village of Trang Bang and the ARVN (Army of the Republic of Vietnam) who were trying to force the NVA out of the village.  Recent reports in the news media that an American commander ordered the air strike that burned Kim Phuc are incorrect.  There were no Americans involved in any capacity.  "We (Americans) had nothing to do with controlling VNAF," according to Lieutenant General (Ret) James F. Hollingsworth, the Commanding General of TRAC at that time.  Also, it has been incorrectly reported that two of Kim Phuc's brothers were killed in this incident.  They were Kim's cousins not her brothers.

Myth: The United States lost the war in Vietnam.

Fact:  The American military was not defeated in Vietnam. The American military did not lose a battle of any consequence.  From a military standpoint, it was almost an unprecedented performance.  Westmoreland quoting Douglas Pike, a professor at the University of California, Berkley a renowned expert on the Vietnam War).  This included Tet 68, which was a major military defeat for the VC and NVA.

THE UNITED STATES DID NOT LOSE THE WAR IN VIETNAM, THE SOUTH VIETNAMESE DID.  Read on........

The fall of Saigon happened 30 April 1975, two years AFTER the American military left Vietnam.  The last American troops departed in their entirety 29 March 1973.

How could we lose a war we had already stopped fighting?  We fought to an agreed stalemate.  The peace settlement was signed in Paris on 27 January 1973.  It called for release of all U.S. prisoners, withdrawal of U.S. forces, limitation of both sides' forces inside South Vietnam and a commitment to peaceful reunification.  The 140,000 evacuees in April 1975 during the fall of Saigon consisted almost entirely of civilians and Vietnamese military, NOT American military running for their lives.  There were almost twice as many casualties in Southeast Asia (primarily Cambodia) the first two years after the fall of Saigon in 1975 then there were during the ten years the U.S. was involved in Vietnam.  Thanks for the perceived loss and the countless assassinations and torture visited upon Vietnamese, Laotians, and Cambodians goes mainly to the American media and their undying support-by-misrepresentation of the anti-War movement in the United States.

As with much of the Vietnam War, the news media misreported and misinterpreted the 1968 Tet Offensive.  It was reported as an overwhelming success for the Communist forces and a decided defeat for the U.S. forces.  Nothing could be further from the truth.  Despite initial victories by the Communists forces, the Tet Offensive resulted in a major defeat of those forces.  General Vo Nguyen Giap, the designer of the Tet Offensive, is considered by some as ranking with Wellington, Grant, Lee and MacArthur as a great commander.  Still, militarily, the Tet Offensive was a total defeat of the Communist forces on all fronts.  It resulted in the death of some 45,000 NVA troops and the complete, if not total destruction of the Viet Cong elements in South Vietnam.  The Organization of the Viet Cong Units in the South never recovered.  The Tet Offensive exceeded on only one front and that was the News front and the political arena.  This was another example in the Vietnam War of an inaccuracy becoming the perceived truth.  However inaccurately reported, the News Media made the Tet Offensive famous.